These are the Plaza Tiller Girls, as painted by Walter Sickert in 1928. I came across this image whilst I was trying to find out more about the stage shows that used to accompany film screenings in some of the bigger London cinemas. The Tiller Girls got their name from the entrepreneur John Tiller, who started training dancers in Manchester in the 1890s, and later set up a school in London on Charing Cross Road. Once trained, a successful dancer might work in a touring group or a revue, or else join one of the Tiller troupes associated with a particular venue.

Postcard of the Plaza Theatre, from the Arthur Lloyd website.

The troupe in Sickert’s painting was attached to the Plaza Theatre on the corner of Lower Regent Street and Jermyn Street, facing out towards Piccadilly Circus. The Plaza was a plush, 1,896-seater venue, which opened in 1926 as the London home of Paramount Pictures. In common with other big cinemas built around this time, the Plaza was designed with a capacious stage as well as a screen, perfect for showcasing variety acts either before or in between films. To take one random example of the kinds of “cine-variety” programme this could result in, in May 1927 the theatre was advertising a run of the Gilda Grey film Cabaret, coupled with the Richard Dix and Betty Bronson film Paradise for Two, plus stage turns from the Tiller dancers and the musical act “Kel Keech and his Banjolele Banjos“.

There were resident Tiller troupes at other London cinemas, too, including the nearby Carlton and the Astoria. Each of them had their own colour scheme (the Plaza Girls rehearsed in blue-and-white check outfits) and their own distinctive line-up. The dancers at the Plaza were especially known for their high-kicking long legs. Like all Tiller Girls, the Plaza troupe prided themselves on the precise, synchronised timing of their dance routines. Describing the experience of watching them, one critic wrote (in a phrase that apparently became a publicity tagline), “They dance as one woman, and what a woman!”

The Tiller Girls also provoked more ambivalent responses. The German writer Siegfried Kracauer saw their carefully co-ordinated choreography as one of the clearest expressions of a new phenomenon he dubbed the “mass ornament”. This was the artistic equivalent of the modern industrial production methods pioneered in the United States by people like William Taylor and Henry Ford. “The hands in the factory,” Kracauer wrote, “correspond to the legs of the Tiller Girls.” In other words, both the assembly line and the chorus line subordinated individual identity to the logic of the machine. (If it helps Kracauer’s argument, John Tiller did spend his early years supervising workers in the Lancashire cotton mills.)

I’m not sure whether Walter Sickert shared Kracauer’s understanding of the Tiller Girls. For a start, there’s not much machine-like about the movements on display in his painting. In fact, Sickert seems to have gone out of his way to make the show look raw and spontaneous. There’s a story that the Plaza dancers were disappointed by Sickert’s depiction of them because their legs and heads were all shown moving in different directions. And, despite the slightly chilly colour palette, the row of heads and musical instruments huddled around the stage give the scene a feeling of intimacy.

Whatever he thought of them, Sickert was obviously intrigued by the Plaza troupe. He painted another picture of them in 1928 (minus the silhouetted figures in the foreground), and again in 1938, in a much larger canvas exhibited as High Steppers.

Sickert’s second painting of the Plaza Tiller Girls in 1928, from the Bridgeman Art Library. 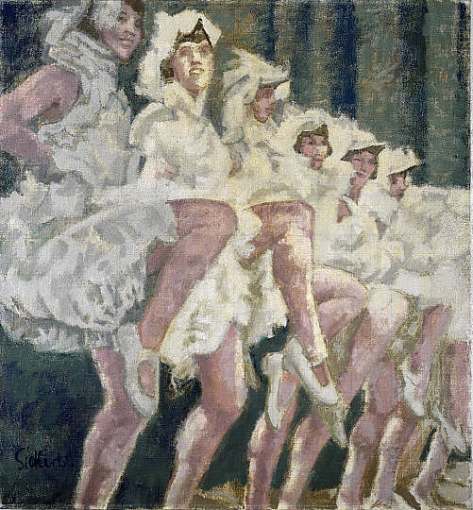 It’s doubtful, though, that Sickert ever saw the Tiller Girls in action. According to the art historians Wendy Baron and Richard Shone, Sickert worked mainly from photographs during the later part of his life. The source for High Steppers was most likely a publicity still printed in the London Evening News in 1927, which advertised the Plaza troupe’s appearance in the film A Little Bit of Fluff (starring Betty Balfour and Syd Chaplin). His 1928 Tiller Girl paintings were probably also based on publicity photos, rather than first-hand observation. If we’re looking for something specifically modern about these paintings, perhaps we could find it not just in the subject matter, but also in Sickert’s multi-media working methods. There’s definitely something a bit dizzying in the flow of images from stage to screen to newspaper to art gallery.

There were Tiller Girls at the Plaza until at least 1931, when they were sharing the bill with the American musician Eddie Peabody (another banjo player) and the “jungle picture” Rango. The Plaza Theatre itself is now the site of the Apollo Cinema, Piccadilly Circus, and a Tesco supermarket.

The site of the Plaza Theatre photographed in 2007, from the Cinema Treasures website.

There’s more about the Plaza Theatre and its afterlife in London’s West End Cinemas by Allen Eyles and Keith Skone. The book Tiller’s Girls by Doremy Vernon contains reminiscences from women who worked as Tiller dancers, as well as some great illustrations. I got most of my information about Sickert’s paintings from the 1992 exhibition catalogue produced by Wendy Baron and Richard Shone for the Royal Academy of Arts. The Tate website also has a detailed profile of Sickert, which talks about his career-long fascination with popular culture.